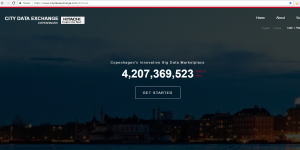 Hitachi Insight Group’s City Data Exchange pilot in Copenhagen is the latest attempt at a model of monetization around Open Data. There are some hurdles, both practical and ethical, that this model will have to overcome. Repackaging public data for resell limits re-use, accessibility and may push ethical boundaries when public data is enriched with private data.

Many years ago I worked as a Vice President for a data exchange company. This company, RateWatch, packaged and resold bank rate data to banks. The banks found it cheaper to buy rates from the largest database of bank rates in the world rather than try to gather the intelligence themselves.

Selling Access is not what Smells About this Deal

APIs usually have tokens and these tokens can be throttled. This is to prevent abuse of the API and the underlying data. Governments that sell a premium access to these API are a different animal to what Hitachi is doing. Consuming millions of rows of data is not something the average person does. Selling access to the API, with a Service Level Agreement (SLA), allows public sector to make the data more reusable.

Local government can do this with other assets: toll roads; industrial use of natural resources; access to medical care; an expectation of public safety. All of these municipal services have a basic free level and a level at which there are additional fees. Consider transportation, if you drive a car you pay taxes and gasoline to drive. Taking a bus is less expensive and there are no taxes. In the same way data can be distributed more or less equally. The real difference is in the velocity of data consumption.

Examples of Companies that Collect and Repackage data:

These companies spend money to gather information about all of us based on our commercial and entertainment habits. They then sell this data to marketing companies looking to remarket to all of us. The deal is we exchange our data in return for small benefits at the gas pump, the grocery store, the movie theatre and probably every place you shop. That is ok. We can opt out. We know it’s happening and we play along.

How the Hitachi Deal Works

The idea of data exchanges has been around probably as long as humans have been writing things down. Now that most of us operate in digital environments on a daily basis, it is not surprising that companies have figured out that data is money.

Hitachi Insight Group approach the City of Copenhagen. The City pledged $1.3 million and Hitachi matched these funds at 2:1. Note again that Hitachi is using money from the [local] government. This money is used to incentivize the private sector to invest money in making the data suitable and reliable for data sharing. In this scheme, the City recovers some of its upfront costs in making the data suitable for release. Hitachi plans to license its technology to other cities with a one time startup fee after which there will be no further obligations on the part of the government.

This implies that all of the revenue then goes back to the Hitachi Group. Hitachi does not know if this is a viable model and neither does the City of Copenhagen. At best, the City achieved a goal of limited value, it recovered some capital. At worst, the city short-circuited its own Smarter City initiative.

When we talked about access to APIs and cities wanting to charge for premium access, we decided that was ok. The City has an obligation to taxpayers to recover any revenue possible. Residents can access the API without a token for research or data storytelling, business can pay a small fee to increase the velocity of the data harvested from the Open Data Portal.

What makes the Hitachi deal so bad for Copenhagen is that it does not solve the data dissemination issue. Hitachi will control the data market and all access to the data.